What this handout is about

When we use nouns in English, articles (a, an, and the) specify which and how many nouns we mean. To choose the correct article for your sentence, you need to answer two questions. First, do I mean this one exactly, one of many, or all of them everywhere? Second, is the noun count or non-count? This handout explains these questions and how their answers help determine which article to use.

As you use the handout, try to keep three things in mind:

This is a simple list, but understanding it and remembering it is crucial to using articles correctly.

Rule # 1: Every time a noun is mentioned, the writer is referring to:

Rule # 2: Every kind of reference has a choice of articles:

Rule # 3: The choice of article depends upon the noun and the context. This will be explained more fully below.

To choose the best article, ask yourself these questions:

Your answers to these questions will usually determine the correct article choice, and the following sections will show you how.

When you mean “all of them everywhere”

Talking about “all of them everywhere” is also called “generic reference.” We use it to make generalizations: to say something true of all the nouns in a particular group, like an entire species of animal. When you mean “all of them everywhere,” you have three article choices: Ø, a/an, the. The choice of article depends on the noun. Ask yourself, “What kind of noun is it?”

Note: We use this form (the + singular) most often in technical and scientific writing to generalize about classes of animals, body organs, plants, musical instruments, and complex inventions. We do not use this form for simple inanimate objects, like books or coat racks. For these objects, use (Ø + plural).

How do you know it’s generic? The “all…everywhere” test

Here’s a simple test you can use to identify generic references while you’re reading. To use this test, substitute “all [plural noun] everywhere” for the noun phrase. If the statement is still true, it’s probably a generic reference. Example:

You’ll probably find generic references most often in the introduction and conclusion sections and at the beginning of a paragraph that introduces a new topic.

When you mean “one of many”

Talking about “one of many” is also called “indefinite reference.” We use it when the noun’s exact identity is unknown to one of the participants: the reader, the writer, or both. Sometimes it’s not possible for the reader or the writer to identify the noun exactly; sometimes it’s not important. In either case, the noun is just “one of many.” It’s “indefinite.” When you mean “one of many,” you have two article choices: Ø, a/an. The choice of article depends on the noun. Ask yourself, “What kind of noun is it?”

Note: We use many different expressions for an indefinite quantity of plural or non-count nouns. Words like “some,” “several,” and “many” use no article (e.g., We need some volunteers to help this afternoon. We really need several people at 3:00.) One exception: “a few” + plural noun (We need a few people at 3:00.) In certain situations, we always use “a” or “an.” These situations include:

Note: The writer does not change from “a break” to “the break” with the second mention because she is not referring to one break in particular (“this break exactly”). It’s indefinite—any break will be fine!!

When you mean “this one exactly”

Talking about “this one exactly” is also called “definite reference.” We use it when both the reader and the writer can identify the exact noun that is being referred to. When you mean “this one exactly,” you have two article choices: Ø, the. The choice of article depends on the noun and on the context. Ask yourself, “What kind of noun is it?”

Note: Some proper nouns do require “the.” See the special notes on nouns below.

Shared knowledge (both participants know what’s being referred to, so it’s not necessary to specify with any more details)

Ordinals and superlatives (first, next, primary, most, best, least, etc.)

Restricters (words, phrases, or clauses that restrict the noun to one definite meaning)

Plural nouns in partitive -of phrases (phrases that indicate parts of a larger whole) (Note: Treat “of the” as a chunk in these phrases—both words in or both words out)

Note: “Few examples” is different from “a few examples.” Compare:

For the more visually oriented, this flowchart sketches out the basic rules and basic questions. 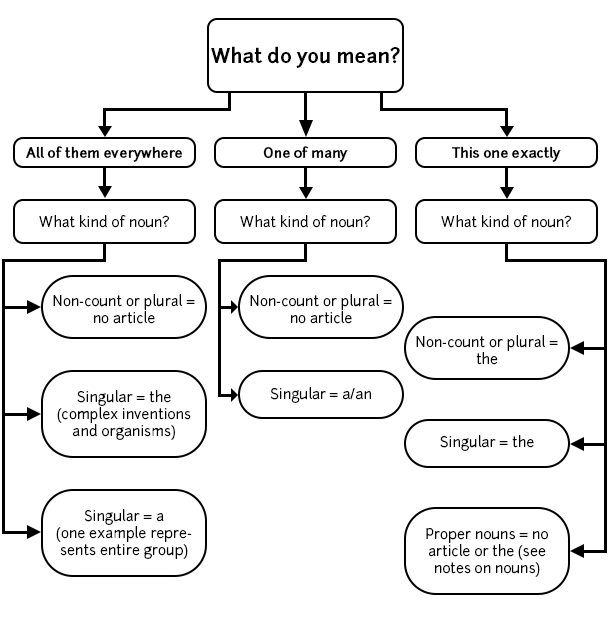 Some notes about nouns

Proper nouns (names of people, places, religions, languages, etc.) are always definite. They take either “the” or no article. Use “the” for regions (like the Arctic) and for a place that’s made up of a collection of smaller parts (like a collection of islands, mountains, lakes, etc.). Examples:

Note: Articles change when proper nouns function as adjectives Notice how the article changes with “Great Lakes” in the examples below. When place names are used as adjectives, follow the article rule for the noun they are modifying. Examples: I’m studying …

We consulted these works while writing this handout. This is not a comprehensive list of resources on the handout’s topic, and we encourage you to do your own research to find additional publications. Please do not use this list as a model for the format of your own reference list, as it may not match the citation style you are using. For guidance on formatting citations, please see the UNC Libraries citation tutorial. We revise these tips periodically and welcome feedback.

This work is licensed under a Creative Commons Attribution-NonCommercial-NoDerivs 4.0 License.
You may reproduce it for non-commercial use if you use the entire handout and attribute the source: The Writing Center, University of North Carolina at Chapel Hill

Find Us on CarolinaGO Android

Find Us on CarolinaGo iOS